OUR VIDEO
Meet our team and learn more about our extensive suite of HR related services.
Home › Who We Are › Meet The Team › Erika Estevez 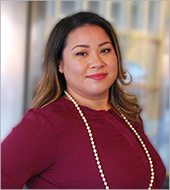 Erika Estevez serves as OperationsInc’s Finance Manager. With over 15 years of diverse accounting, finance, and administrative experiences, Erika manages the firm’s accounting operations and financial reporting functions, which are critical to the organization’s success.

Erika’s tenure at OperationsInc began in 2013, when she joined the group as an Office Administrator. In that role, she supported CEO David Lewis as well as other key members of the organization.

Due to the firm’s overall explosive growth and expansion of their accounting function, Erika was quickly promoted in 2014 to the role of Accounting Associate. There, she took on a more specialized role within the organization, providing accounts payable and accounts receivable support.

Prior to her time at OperationsInc, Erika worked for various sized companies within the Healthcare, Commercial Real Estate, and Commodity Trading industries.

She resides with her husband and two sons in Stratford, CT.

Send me the latest HR and Payroll news, tips and events via email.