Is It Ever OK to Quit on the Spot?

The following appeared in The Wall Street Journal on June 21, 2016, and features comments from OperationsInc CEO David Lewis. To view the original article, please click here.

For almost all of us, there comes a moment when we are tempted to quit our jobs on the spot.

A growing number are actually doing it, many employers say.

Some bosses blame young employees who feel frustrated by limited prospects or have little sense of attachment to their workplace. But employment experts say some older workers are quitting without notice as well. They feel overworked or unappreciated after years of laboring under pay cuts and expanded workloads imposed during the recession.

Others cite an increased tendency among employers to rescind job offers, making new hires wary of giving notice at their old jobs before starting a new one.

Others don’t care enough to give the traditional two weeks’ notice—or don’t know it is expected, employers say. A burning need for a vacation was the excuse given by one employee who exited Pierre Tremblay’s company without notice last year. He said he was taking another job and quitting immediately because he had just gotten a great deal on a vacation package to the Dominican Republic that left the next morning, says Mr. Tremblay, director of human resources for Dupray Inc. of Montreal, an international vendor of steam cleaners and irons.
“Well, good for you,” Mr. Tremblay says he thought at the time. He could understand wanting a vacation, but felt “you’re also screwing our business,” leaving the company short-staffed at a busy time.

Another employee at Dupray, a customer-service rep, scheduled a meeting with Mr. Tremblay, announced she was quitting, then rose and headed for the exit. She seemed surprised when Mr. Tremblay stopped her and explained that employees are expected to give two weeks’ notice, he says. “She said, ‘I’ve been watching ‘Suits,’ and this is how it happens,’ ” referring to the TV drama set in a law firm. 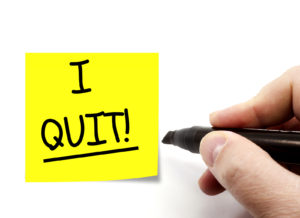 Quitting without notice is sometimes justified. Employees with access to proprietary information, such as those working in sales or new-product development, face a conflict of interest if they accept a job with a competitor. Employees in such cases typically depart right away—ideally, by mutual agreement.

Some employers invite fast exits by routinely dismissing employees on the spot when they try to give notice and stopping their paychecks the same day, says David Lewis, president of OperationsInc., a Norwalk, Conn., human-resources consulting firm. Their employees wonder why they should bother giving notice, says Mr. Lewis, who advises employers to pay departing employees through the notice period.

It can be best to exit quickly if an employer is abusive, or if you suspect your employer is doing something illegal. Erin Dean became physically sick with anxiety and stomach pain after she began to suspect a former employer was misusing elderly clients’ money, says Ms. Dean of Santa Clarita, Calif., who was an administrative assistant at the time. After seeing her boss fire another employee on the spot because she raised the same concerns, Ms. Dean wrote a resignation letter detailing her objections, left it on the boss’s desk when he was out and departed the office for good.

Sometimes work conditions make it difficult for you to do your job. Dental hygienist Tonya Lanthier says she had to cancel her first three appointments after starting work for a new owner of a dental practice, because she lacked password access to the office computers and hadn’t been shown how to operate the dental equipment. The new owner brushed off her questions about her pay and work schedule, says Ms. Lanthier of Atlanta, founder of DentalPost, a job board for dental professionals. “There was no doubt in my mind that I couldn’t work for him,” she says, and she quit after her first day.

More often, quitting without notice “is done in the heat of emotion, by someone who is completely frustrated, angry, offended or upset,” Mr. Lewis says. That approach can burn bridges, generate bad references and leave employers scrambling.

Vannessa Wade walked off her first job years ago without giving notice, and she has regretted it ever since. She felt pigeonholed in her role as a community- and government-relations manager. Her boss paid little attention to her work and refused her requests for coaching or changes in her duties, says Ms. Wade, owner of a Houston public-relations and marketing firm. Finally, “I logged off my computer, cleared my desk, returned emails and walked out,” she says.

Almost immediately, she began worrying: “Do they think I’m a quitter? Is this the way I’m going to make every decision in my life?” She soon found a job she liked better, but she wishes she had stayed long enough on her first job to accomplish more and build stronger relationships. Working through challenging situations “is part of developing character,” she says.

Changing jobs often isn’t necessarily bad; workers ages 20 to 24 change jobs about every 16 months on average, the Bureau of Labor Statistics says. Those ages 25 to 34 switch jobs every three years, compared with 5.5 years for all workers 25 and over.

However, people sometimes exit without “stepping back and asking themselves, ‘Have I accomplished anything?’ ” says Jill Tipograph, co-founder of Early Stage Careers, of New York City, a coaching and advisory service for students and recent grads.

Hasty exits can often be avoided if employees start jobs with realistic expectations, Ms. Tipograph says. “Those who are most spontaneous, who say, ‘Yup, yup, sounds good,’ to the first prospect, suffer more because they haven’t taken the time to figure out whether it’s a fit,” she says. She recommends researching prospective employers in depth in advance, trying to figure out what it is going to be like to work there and whether you’ll have the responsibility and advancement opportunities you want.

Employees who are frustrated by management practices should try talking with their managers. “You have a responsibility to try to communicate about what’s wrong,” says Phyllis Hartman, a Freedom, Pa., human-resources consultant. “Start figuring out if there is anything you can do to fix it. The worst that can happen is that nobody listens or they tell you no,” she says.

Employees and employers alike have the right under at-will employment laws in almost all states to end their relationship without notice, for any reason, says Michael Schmidt, vice chair of labor and employment practice in New York for the law firm Cozen O’Connor. The two-week rule is a widely accepted standard of workplace conduct.

Some employers have written policies imposing penalties for quitting without notice, however, such as forfeiting educational benefits, Mr. Schmidt says. Employers may also ask new hires to sign employment contracts requiring them to forfeit pay for unused vacation or paid time off if they quit without notice. Before you announce you are leaving, check your employer’s handbook or any employment contract you signed.

If a new job forces your hand, work overtime to repair your relationship with your boss. Ashley Stahl coached a manager who reluctantly quit after getting a new job offer. It included a 60% pay increase and promotion to a higher level of management but also an ultimatum: “Either show up Monday and take this role, or don’t show up at all. ” Ms. Stahl, chief executive officer of a Santa Monica, Calif., training company for millennial job seekers, says the woman found ways to mend fences with her former bosses by referring several candidates to succeed her and returning later, on weekends, to help train her successor on her own time.

A vanishing act tends to stick with people. Roshawnna Novellus, president of an Atlanta business and financial-strategy consulting company, had a colleague in a previous job whose office was lined with photos and awards won during his 10-year career. He moved everything out of his office one weekend. The only thing many of his former colleagues remembered about him was the sight of his bare office walls Monday morning, Ms. Novellus says.

Subject
Human Resources
“The team was knowledgeable, easy to communicate with, and helped me organize and review our company’s ACA data in a way that wasn’t completely overwhelming and time consuming. The filings were accurate and done before the deadlines—I couldn’t have asked for a smoother process!”
Senior Manager
Human Resources, Freepoint Commodities, LLC